Jump to a Scholarship:

Elementary, High School, Youth Group scholarships will be awarded to Missouri elementary or high school classes or youth groups who have ongoing or proposed projects related to natural resource conservation, especially those which entail education and physical involvement in the protection of the natural environment. Applicants must include the names of the teacher, class or group, and school, and addresses for the teacher and school should also be included. The applicants must describe the objectives and procedures used in the project. An essay with the theme of how the project will benefit the community should also be included. The application must have the signature and title of a school superintendent or principal.

For all scholarships, applications and letters of recommendation must be received by January 31.

Jim was a brilliant student and exceptionally fine musician, having performed as a concert pianist at Carnegie Hall, and solo tenor singer in the London Opera House. Jim’s love for the outdoors and nature paralleled his enthusiasm for music. He enjoyed hunting, fishing, and camping with his family. He also earned the Eagle Scout Award from the Boy Scouts of America with gold and silver palms.

In 2017, Jim’s father, Glenn lost his courageous battle with cancer. Glenn was a nationally recognized conservationist and was honored in many ways over the course of his lifetime. Among his many credits was the William T. Hornady Gold Medal from the Boy Scouts of America – a rare lifetime achievement award given to a very small number of people historically, including Theodore Roosevelt and Aldo Leopold. Glenn was also a recipient of the Ducks Unlimited Distinguished Service Award, and the Master Conservationist Award by the Missouri Department of Conservation, to name only a few of his honors.

After Glenn’s death, the name of the scholarship was changed to the Chambers Family Memorial Scholarship as a way to honor both father and son.

This is a Conservation Federation of Missouri (CFM) sponsored scholarship. In 2018, a complimentary scholarship was created by the Missouri Conservation Heritage Foundation (MCHF). As funds allow, a second MCHF scholarship may also be awarded targeting senior undergraduates.

Who may apply – This scholarship is awarded annually to a graduate or senior undergraduate student majoring in wildlife biology/ecology, or natural resources conservation at a Missouri college or university. The scholarship is designed to recognize excellence in academics, leadership, and conservation education.

How to apply – Applications must include:

Application materials should be sent electronically (either MS Word or PDF) by January 31 to: (Micaela Haymaker, mhaymaker@confedmo.org). Incomplete or late applications will not be considered.

The Conservation Federation of Missouri (CFM) is pleased to announce that applications are now being accepted for the Kirkham Family CFM Scholarship. This $1,000 scholarship will be awarded to an upperclassman or graduate student who is currently a member of CFM (or whose family is a member of CFM) and is studying big game at an accredited college or university.  This scholarship is intended to support the career development of a wildlife biologist. Applicants must be enrolled at a Missouri college or university.

Judd Kirkham was a Conservation Federation of Missouri Board Member, Past President, and Life Member.

Please make sure you submit the following items:

Amount of scholarship:  $1,000.00. There will be one scholarship awarded annually.

Applications and all other materials needed must be received by January 31.

You can also email the information to Micaela Haymaker at mhaymaker@confedmo.org

If you have questions about the scholarship, email us.

The Foundation’s Ed Stegner Natural Resource Scholarships were established to provide major financial aid to encourage and assist students in five areas of natural resource management: fisheries, forestry, wildlife, parks and recreation, and soil and water conservation.  Funding for this scholarship program was provided to the Foundation by Ed Stegner of Pilot Grove, Missouri.  A Master Conservationist, Stegner is the former executive director of the Conservation Federation of Missouri and is especially known for his leadership role in the passage of the 1/8th of 1% conservation sales tax to fund the Conservation Department’s expanded program, Design for Conservation.

Applicants must be Missouri residents from any county or city in the state who are or plan to be enrolled as an undergraduate at a Missouri college or university in the chosen discipline of study.  Preference will be given to individuals with demonstrated financial needs.  Applications and supporting materials must be submitted by January 31.

Apply for a scholarship online or complete and submit the above form to the Conservation Foundation of Missouri Charitable Trust, 728 W. Main, Jefferson City, MO 65101-1559 by January 31.

The Foundation’s Carl Morrow Graduate Scholarships are a joint venture with the professional societies that relate to five different resource areas, specifically the Missouri chapters of the Wildlife Society, American Fisheries Society, Society of American Foresters, Missouri Parks and Recreation Association, and the Show-Me Chapter of the Soil and Water Conservation Society. These groups provide committees that select the recipients in their respective categories. Once selected, the scholarship recipients are notified and each is presented a check in the amount of $1,000.00.

Applicants must be Missouri residents from any county or city in the state who are or plan to be enrolled as a graduate student at a Missouri college or university in the chosen discipline of study. Preference may be given to individuals who have previously received one of the Foundation’s undergraduate scholarships.

Apply online here or print and submit an application and supporting materials to the address below by January 31.

The Conservation Foundation’s Minority Natural Resource Scholarship has been established to provide financial aid to encourage and assist minority students who are interested in a career in natural resource management, especially in the fields of Fisheries, Wildlife, Forestry, Parks and Recreation, and Soil or Water Conservation. The Foundation’s goal is ultimately to increase cultural diversity in Missouri’s state and federal natural resource agencies.

Eligibility
Applicants for this $1,000 scholarship must have been accepted and enrolled as an undergraduate in a Missouri college or university and should have already selected a major in a natural resource field. Preference may be given to individuals with demonstrated financial need. Application and supporting materials must be submitted no later than January 31. The procedure and application form may be downloaded from the link below.

Selection Process
A committee of the Foundation will meet in February of each year and select the recipient from among the applicants who meet the criteria and have submitted the requested forms.

The Nana family supports conservation efforts in Missouri and beyond. This scholarship is to honor the outdoor legacy Rohil Nana, a lifelong outdoorsman whose passion for hunting led to the development of conservation management efforts for the Himalayan ibex in the Indian subcontinent.

The goal of this scholarship is to support ethnic diversity within natural resource management. Applicants should be an individual of ethnic minority and must be enrolled in a field of study related to the management of natural resources, specifically fish, wildlife, forest, soil, and water at either the graduate or undergraduate level.

Applicants must submit the following information:

Amount of scholarship: $1,000.  There will be one scholarship awarded annually.

Application and all materials need to be received by January 31. 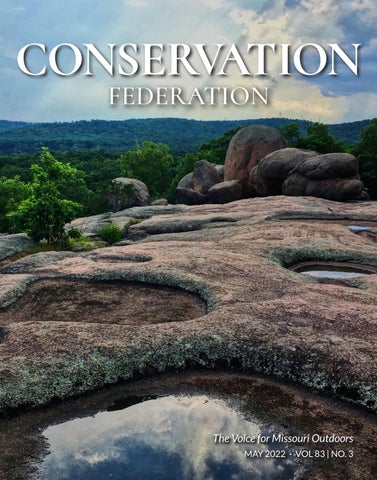